While most would consider gold and silver as the most precious metals around, many would be surprised to know that platinum is equal to and sometimes more valuable than even gold. As a result, software developer Microgaming created a 40 payline, 5 reel online slot game centred around everything platinum. Pure Platinum is therefore a bright, chromed slot that offers classic slot gameplay as well as some bonus content to keep players entertained.  On top of all this, Pure Platinum also come with a 1000x non-progressive jackpot, and can be played on just about any modern platform available, including smart phones and tablets.

Thematically, Pure Platinum is a game inspired by the very precious metal that it is named after, and this shows in both the aesthetics of the game, as well as the symbols found on the reels. The backdrop of the slot is extremely colourful, and at first is may come across as a bit overwhelming to new players. There is a to take in at once, but after a while the player will learn where everything fits and how it functions. A large, futuristic smelter y can be seen behind the reels, obviously where the platinum is smelted into ingots, but this only makes up the top of the screen, as the rest of the background is taken up by the game itself.

The symbols in Pure Platinum are to do with everything platinum; from the ingots themselves to more refined objects, such as jewellery. Traditional numbers and letters are the common symbols of a lesser value, although still given a chrome sheen to fit with the game. More valued symbols, such as the ring, ingots, and the watch, are more rare, and provide the highest scores during spins, if landed. Players can also expect a wild and scatter symbol, each with a different usage in the game.

The wild, shown as the Pure Platinum logo, is frequent, and can be used as a substitute for other symbols in the game. The wilds can also stack on top of each other, meaning that there is a chance to gain a stacked wild, which increases symbol combination chances. The scatter, on the other hand, which is a shiny, platinum disc, is used exclusively for triggering the bonus content. 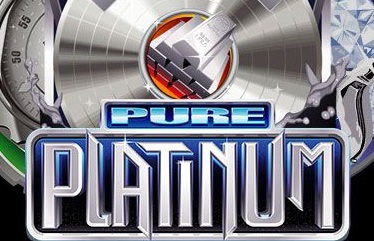 As mentioned before, the scatter is the symbol needed to activate the bonus features, and in the case of Pure Platinum, this comes in the form of free spins. Three or more scatter symbols are needed to land anywhere across the reels for the free spins to be awarded and players will be given a choice of three different options. This is a mix of the amount of free spins and a multiplier, and players can choose whether to have more free spins and a lower multiplier, or the opposite: a higher multiplier and less free spins.

This is the slot for players that are tired of playing slots featuring nothing but gold as the theme, and the sparkle and shine makes the slot quite a spectacle for the eyes. Gameplay and bonus content is fairly standard, making the game easy to learn and play.