Developers Leander Games and distribution partners Amaya Games have fairy-obsessed players in mind with their new Magic Gems video slots title. True, there is only one fairy featured in the game, but she is a constant presence, and the game design is set in a magical glade. Five transparent reels, with four windows each, are constructed of saplings and vines, before a backdrop of sunlit trees, drifting fairy lights, forest flowers and colourful mushrooms.

Forest fairy Felicity hovers alongside the new Magic Gems reels, alternately blowing lucky fairy dust across them, and clapping and cavorting to celebrate wins. The 40 paylines are fixed, but total bet per spin can be varied from 0.40 to 20.00 in the chosen currency. A constant loop of ethereal music adds extra fairy-cred to the action, perked up with some jazzy brass during bonus rounds.

Fairy Felicity also serves as the Magic Gems Wild symbol, standing in for any others except the bonus to enable more winning lines like most wilds. 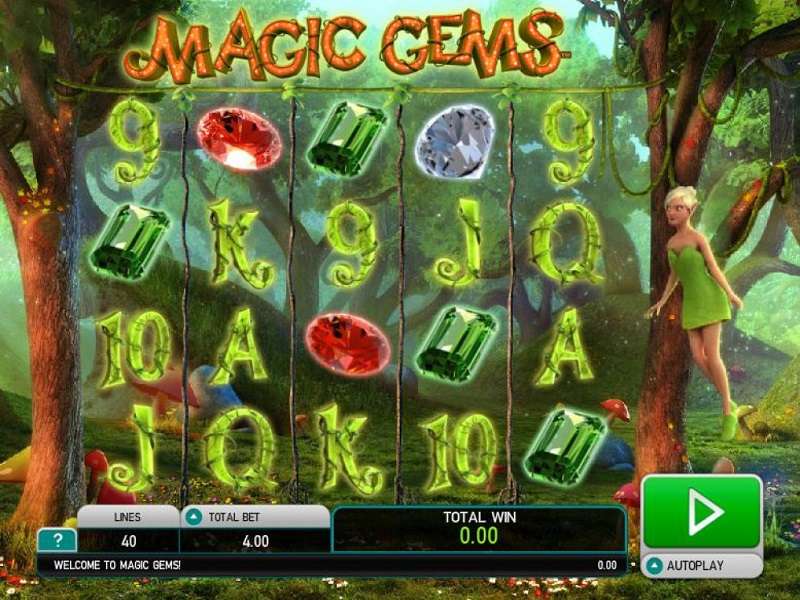 The Exploding Chains feature in Magic Gems effectively gives players more chances to win on the same bet. Every time standard icons feature in a winning payline, all the winning icons, excluding any Wilds, explode and disappear. New icons drop in to take their place, giving the player a new shot at forming winning combos.

The exploding chains continue until no win results, and the game reverts to the player’s next paid spin. Because any Wilds stay on the reels and accumulate, the Exploding Chains feature can dramatically increase prizes in standard play.

A Chest of gold coins is the Scatter symbol, and if they appear anywhere on Reels 1, 2 and 3 in the same spin, they activate the Free Spins Bonus. The player gets 10 free spins, with the Exploding Chains Feature remaining active, so it is possible to get new winning combinations repeatedly on the same free spin. In addition, any Wilds that pop up in the bonus round remain fixed in that position for the rest of the round, making it possible to accumulate even bigger rewards over the course of all the free spins.

Fairy fans may need to play Magic Gems for some time before they start triggering impressive bonus wins, but the range of bet options caters to that. The Auto Play button can trigger up to 100 spins in succession, allowing long-term play with less strain on players’ carpal tunnels.