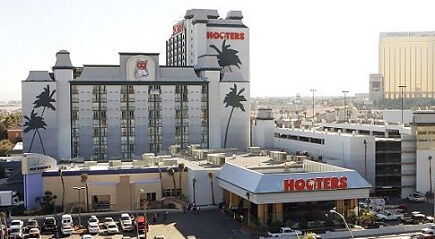 Hooters Casino Hotel at 115 East Tropicana Avenue in Paradise, Las Vegas, is conveniently close to the Strip for guests who want to sample a smorgasbord of Vegas casinos. The extension of the saucy Hooters restaurant-chain theme throughout the hotel and casino is a fitting match to the unabashed exuberance with which Las Vegas embraces hedonism.

Croupiers, dealers, wait staff and bartenders, like the waitresses at Hooters restaurants, are all curvy beauties clad in tight shorts and tank tops, branded with the company logo. With colours, textures and décor also chosen to mirror the chain’s theme, Hooters Casino Hotel extends the concept from a dining experience to a complete entertainment package.

Preserving a Bit of Vegas History

The original building in which the Hooters Casino Hotel is housed is more than 40 years old, which in Vegas terms makes it practically historic. Built as a Howard Johnson hotel, it opened in 1973, but was bought by casino entrepreneur Bernard Nemero in 1975. He added a casino and renamed it the Paradise Hotel. However, a mob scam in 1976 bankrupted the Paradise, and the operation went through several changes of ownership until 2005.

This also involved several changes of name, and at various times it was called the 20th Century, the Hotel San Remo, the Pacifica, the Treasury or the Polynesian. Hooters bought into the redevelopment of the property in 2005, and after a $190-million upgrade, Hooters Casino Hotel opened on Super Bowl weekend in February 2006.

One of the main attractions of the Hooters Casino Hotel is that it serves as a reasonably priced home base from which all the top attractions of the Las Vegas Strip are within walking distance. As a result, the hotel does not offer the theme parks, sports facilities, spa treatments or entertainment extravaganzas of many bigger operations.

Instead, Hooters provides a small but comprehensive range of services tailored to the tastes of their target market. In summer, for example, tons of imported sand transform the pool area into a party zone for the Hooters Beach Bash, with the Hooters’ girls wearing their outdoor uniform: bikinis.

Focusing on Food, Drink and Fun

The Hooters restaurant, naturally, is the main dining venue, but fine dining is also an option at the Mad Onion. Sports fans can combine gaming and big-screen TVs at the Saloon bar, or in the more relaxed Pete n Shorty’s Tavern for a change of pace. The Lobby bar is right next to the casino floor, and the entertainment menu also features comedy, music and dance shows.

The effectiveness of this strategy is borne out by the fact that although Hooters has lower gaming revenue than most Vegas casinos, it has one of the highest ratios of gaming to non-gaming income. Revenues from food, beverages, entertainment and hotel services are almost double the gaming revenue, which is highly unusual in Las Vegas.

Hooters Casino Hotel offers a fairly small selection of casino games, considering its capacity of 696 rooms, but this is again the result of its positioning as a well-priced home/party base from which to explore the Strip. There are only 370 slots choices, including video poker variants, but many players are more interested in online baccarat in Canada, and the Hooters girls who run them.