Grace of Cleopatra by Novomatic 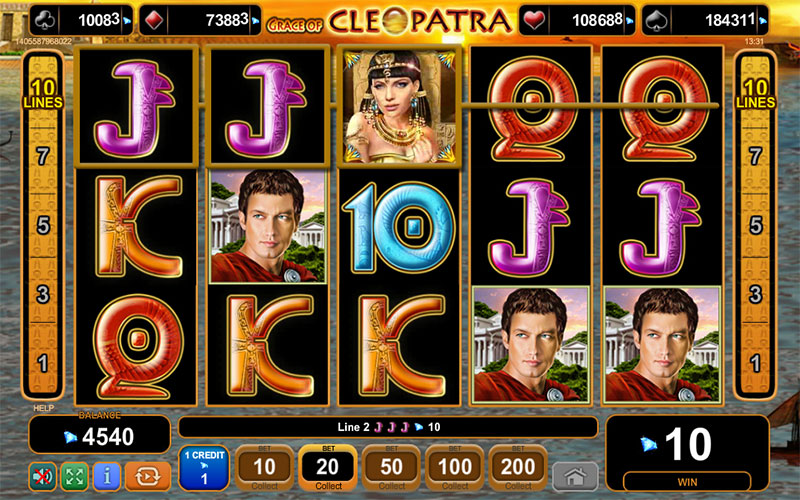 Grace of Cleopatra is brought to you by software giant Novomatic, and is an online ETG slot machine game. It is set in Ancient Egypt, and is one of three games of the Egyptian Series to come from Novomatic.

Cleopatra herself features heavily in the game as she runs Egypt with an iron fist, and keeps both Julius Ceasar and Marc Anthony in line. Grace of Cleopatra is also available online and is supported by both iOS and Android, on both mobile phones and tablets. With many different credit bet combinations, and loads of credits, this is a great game for the whole spectrum of players found online, from beginners to experienced and fits into all players budgets and styles of play.

Unusually for EGT titles, there has been some quite serious work put into the design outside of the frame of the reels in Grace of Cleopatra. The view of the game is over the River Nile, with temples in the background, waving papyrus, and a pretty blue sky. The symbols are detailed and nicely drawn, with the non important ones being ten to Ace of the deck of cards. Other symbols to appear in the reels are a scarab beetle, an Egyptian cat, both of which pay out even for a pair on the reels, as well as the usual three four and five.

The last two symbols in the main game are the human symbols, represented by none other than Julius Ceasar and Marc Anthony themselves. Julius will pay out more than Marc, and if you add a Cleopatra symbol to the male ones, the winnings are even bigger. As you can imagine, the last and most lucrative symbol on Grace of Cleopatra is Cleopatra herself. She may also turn wild at any point of the game and will substitute for all other symbols to create a cornucopia of prizes. Three or more of her will trigger 10 free spins during which random symbols will expand and cover the entire reel before every spin.

As mentioned above, the free spins game has a twist in the way of a random expanding symbol. This symbol could be any one in the game and is chosen totally at random. If you are lucky it could be Julius or possibly Marc Anthony. This expanding symbol expands to cover all three spots on a reel while your ten free spins are in play. This random symbol stays for the duration of the special game and any retriggers of it.

If your symbol goes onto several reels at once, it can cover quite a lot of the reel space, and result in quite substantial wins. And as stated before, if your random is the top paying symbol and then also covers most of the reels, well the wins are very exciting.

The second game is the progressive jackpot, one of which is shared between all EGT slots. This is permanently visible above the reels just to keep the players interest. When the jackpot game triggers, which happens at random, you are taken to a screen with 12 face down playing cards. The player then clicks on these until they have the same suit, which awards the jackpot associated with it.