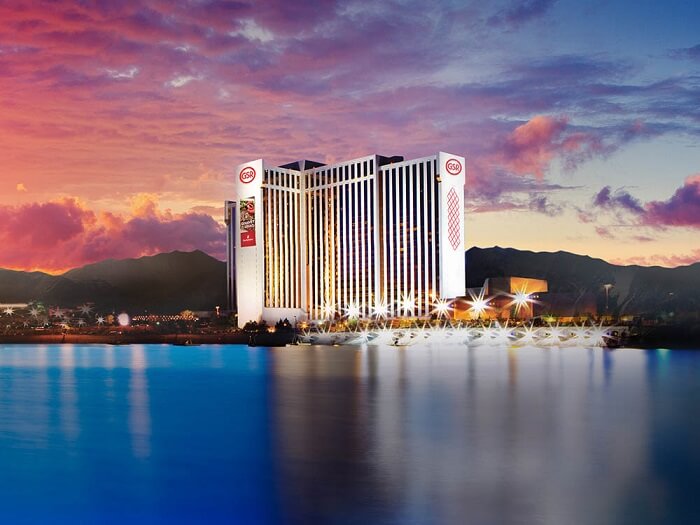 The Meruelo Group, an investment company based in Southern California, owns and operates Grand Sierra Resort. This hotel and casino complex in Downtown Reno, Nevada, offers several amenities and activities to its guests.

The casino opened its doors as the Reno MGM Grand in 1978, and was then acquired by Bally Manufacturing in 1986 along with its sister casino in Las Vegas. It was renamed Bally’s at this time and the popular Donn Arden production Hello Hollywood Hello, which was specifically created for the MGM Reno was shut down on 18 April 1989. Bally Manufacturing filed for bankruptcy in 1992 and sold the casino to Hilton Hotels, when it was renamed the Reno Hilton.

After a few management changes and splitting and renaming of companies the casino was sold again in 2006, this time to an investment group called the Grand Sierra Resort Corp. After the financial crisis of 2008, the GSR Corp couldn’t maintain the casino upkeep or payments and was taken over by companies attempting to do damage control.

This strategy worked and The Meruelo Group acquired the property in 2011, with CEO Alex Meruelo eager to explore the casino’s potential to become a really elite destination resort. He got seasoned professionals to manage and advise him, and undertook a massive renovation and revamp of Grand Sierra. Today the resort continues to go from strength to strength as a leading casino.

The casino has one of the biggest game floors in Northern Nevada, at more than 90,000 square feet. Electronic Games include AUS slots and Video Poker, while Table Games such as Let it Ride Poker, Three Card Poker Pai Gow Poker, Pai Gow Tiles, Baccarat, Blackjack, Craps and Roulette are on offer as well. There is also a busy Poker Room and Bingo games, and a comprehensive Race and Sports Book.

A 5-tiered, points-based Loyalty Programme called Club Grand allows players to exchange credits for free Slot play and complimentary services at the resort’s various facilities. The idea is that the more time and money spent at the Grand Sierra, the more rewarded a player will be and the more motivated to spend even more time and money.

Players can stay in luxury rooms and suites at the hotel, decorated in a contemporary style, or at the fully equipped RV Park. Active military personnel are given special rates, as part of the resort’s commitment to supporting the American Armed Forces.

The different accommodation options put the playing and entertainment opportunities that are available at Grand Sierra within everyone’s reach, regardless of what their budget might be.

In addition to a wide range of casino games, Grand Sierra guests can take advantage of the bowling alley, cinema, spa, pool, shopping centre, convention centre and impressive selection of restaurants at the resort.

The Grand Adventure Land Amusement Park and Grand Theatre, seating 2,700 people and hosting several different acts and shows over the years, round off the resort’s entertainment offerings well. Spontaneous romantics can even get married in the on-site wedding chapel!